06:13
EDT
There are currently no polls set to the side block
Gwaethiel: @chiz, @ Kalasin, I hve a kin dedicated to Leeroy....I bow to his greatness...LOL
Chizbo: @Kalasin: its been done; though I'm not mentioning any names here ;)
Kalasin: Does anyone ever just want to pull a Leroy Jenkins during a skirmish?
Kuzo: SIGN UP!!! https://theforsakenlonelanders.shivtr.com/events/949338?event_instance_id=16262447
Fennel: Hope all is well with you Kuzo!
Fennel: off for holiday weekend!
Kuzo: LOL,..I like your idea Fen,,
Kuzo: No,,Just take a great photo!
Fennel: ya know, since we're doing the chicken run on saturday
Fennel: Yes, Chizbo, good question. Any perimeters for the photo contest? I say we have to make it with a chicken in the frame somewhere
Chizbo: What is pic contest this week? Not in-game right now...
Chizbo: Hi Kuzo! What up!
Kuzo: Yo!! Chiz
Kuzo: 32 songs added to the Band Guide
Kuzo: Band page is under Guides
Mornawenn: found i think (4 songs for now) See ya =)
Mornawenn: Hey where is the Band page please? (o-o)
Valberg: Running off for Canadian Thanksgiving weekend, see you all Monday. Happy Columbus day to all my American friends.
Fennel: Weeeeeee! Get to play lotro tonight. So happy.
Kuzo: Fennel!!!
You do not have permission to shout
News » Entry 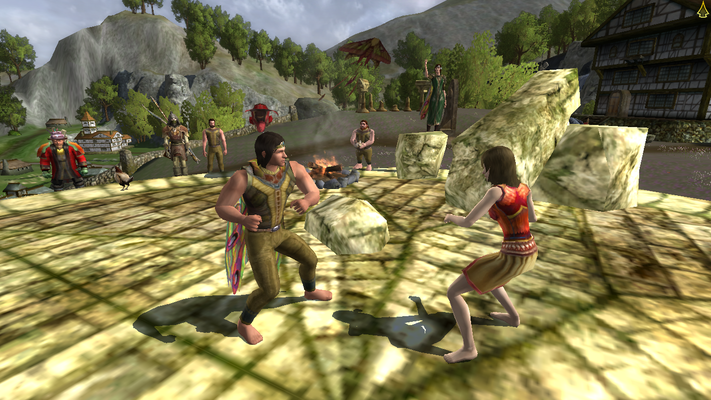 On this day in April, a cool wind blew through Stockpole and the kin gathered to celebrate the opening of our new Kinhouse and this milestone for our Kin!

The events began with Barenaked Fist Fighting! The first opponents were a little unevenly matched, as Rod, fought Unbeard to a decisive victory! Unbeard bravely held his own for the first few seconds at least, and then Rod devastated him with a roundhouse to the left buttock incapacitating poor Unbeard! The next blow hit above the belt but was felt in the neither region below it and Unbeard fell! The round was fought to a draw between Gil and Herdrina! Herdrina would have won if a disgruntled Dwarf who shall remain unbearded, oops I mean unnamed lit a fire and help Gil restore his health!

The next three events were enjoyed by all! The Stockpole Horse race was won by Herdrina, the Bree Race by Rod. The Scavenger hunt put into question all members' knowledge of Bree and some vets learned of places in the town they had not known before! The Insane Elf came out of hiding and was eventually found near the Boar Fountain by Herdrina! All in all a great day!! Thank you to all who took part!! Congratzzzzzzzz!!
1 Like
Share