01:09
EDT
There are currently no polls set to the side block
Kuzo: Yeah!!! Kalasin!!!
Kalasin: on the off-chance that anyone missed me- I'll be back soon! Been getting used to placement workload.
Kuzo: Welcome Jillee!!
Kuzo: Welcome Jillee!!
Evelynwulf: Just thought I would say hi. Hi everyone!
Kuzo: Yes, Klasin,..they have fixed it now
Kalasin: Is anyone else experiencing "Game Launch Failure" when they try to load the game?
Gwaethiel: @chiz, @ Kalasin, I hve a kin dedicated to Leeroy....I bow to his greatness...LOL
Chizbo: @Kalasin: its been done; though I'm not mentioning any names here ;)
Kalasin: Does anyone ever just want to pull a Leroy Jenkins during a skirmish?
Kuzo: SIGN UP!!! https://theforsakenlonelanders.shivtr.com/events/949338?event_instance_id=16262447
Fennel: Hope all is well with you Kuzo!
Fennel: off for holiday weekend!
Kuzo: LOL,..I like your idea Fen,,
Kuzo: No,,Just take a great photo!
Fennel: ya know, since we're doing the chicken run on saturday
Fennel: Yes, Chizbo, good question. Any perimeters for the photo contest? I say we have to make it with a chicken in the frame somewhere
Chizbo: What is pic contest this week? Not in-game right now...
Chizbo: Hi Kuzo! What up!
Kuzo: Yo!! Chiz
You do not have permission to shout
Guide to Grand-Stairs by Kuzo 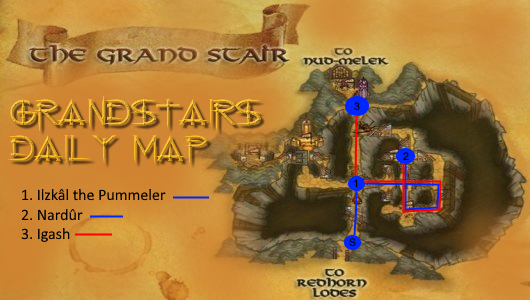 
Your goal is to defeat Igash in the Grand Stair without defeating any other bosses of the Moria Orc-tribes. In doing so, you will assist in efforts to reclaim that crossroads for the dwarves and prove your great worth!
This is a fairly simple run and is set for 56 lev characters, but much lower level toons can be pulled in to the group after the group is in the Instance. We have run it with levs as low as 51 with us! The higher levels toons, 56 and up just enter the instance and then after they are in, they can add the lower levels to the group. The lower levels will then an invite to travel! Once the full group is in you are set to go!!


****** You must engage Nardur the Shield within 10 minutes of starting the first encounter in the instance. You must also not kill any boss mobs besides Nardur and Ilzkâl the Pummeler ********


As you run forward you will come to a closed drawbridge. You must step forward close to it to activate Ilzkâl the Pummeler! He will commence a dialogue with his minions and even slay one of them! He is a nasty piece of work! Once he finishes his spiel the drawbridge will drop! Target him and attack and run in! Let your highest lev player or tank attack first, and then the squishies! You must beat him down as fast as possible because he can heal himself completely! If he says "Feed me your fear" He puts dread on the fellowship and unless it is removed by fear pots or a Cappy, he will heal! Kill him quickly!!!!

You will see other mobs as you advance but only kill those mobs that are in your path! Do not go off track or aggro other mobs.

After you have slain Ilzkâl the Pummeler you will only have 10 minutes to make it to Nardûr!

When Ilzkâl dies run down the stairs to the west and fight through the two warg riders (there is no chest for the first boss). There are two spooks ( Goblin scouts) at the top of the stairs. Remember that you are on a timer, so kill the trash mobs as fast as you can and keep going forward.

If you do not know your way to Nardur, follow someone who does. If you run off in the wrong direction and pull random extra mobs, you will waste time and get lost (go east after Ilzkâl, then south at the next crossroads; see the map above for more clarity). Soon you will reach a larger landing with a bridge on the north edge, and gated board fences ( Warg Pens) on the west and south edges. You do not want to go into these Warg Pens on the Daily run!

Turn right (north) and cross onto the bridge. There are two more spooks and on a landing on the other side. On the opposite side of the bridge is a mob of Warg riders, circling a pillar. Try not to pull them all at once, and kill them as quickly as possible.

Go around the pillar and you will see stairs leading upward. There is a spook in the stairs, kill him! The Fellowship should stop here and only one character goes to the top.

At the top of the stairs is a landing with three mobs! One mob is at the bottom of the stairs to the left. You want someone to pull only this mob back down the stairs you came up, and kill them in the stairwell. You do not need to aggro the other mobs, and use time killing them!

Nardur is activated by someone going to the stairs to the left. He will appear at the top and walk down to challenge the Fellowship. All the Fellowship should bunch up at the bottom of the stairs facing directly down!

During the fight he will shout "Give me some room!" and perform a knockback, if you are facing directly down and are on the bottom step you will be ok, or you can simply move behind him as soon as he yells. He drops two loot chests, both of which drop a Medallion of Moria.

Once he is dead the timer is off and you can take your time. You can loot the two chests without aggroing the other two mobs by mousing over the chests and moving slowly towards them until your mouse cursor turns into a small brown chest. Loot them both!! Now a drawbridge back near the entrance has opened and you can use this short-cut to Igash and victory!!

Igash is a pretty standard boss. He has a knockback, he lays down patches of fire, he hits rather hard and he has some interesting lines of dialogue. Your main tank will tank Igash, and will avoid the patches of fire (standing in fire = death). Be sure to fight Igash within the room itself, if Igash passes out beyond the flags, he will re-set. This is incredibly irritating, since often when he resets there are other fellowship members still fighting on Igash’s side of the flags, which means that the fight itself will not reset and you will not drop out of combat, but Igash will re-spawn with full health and enter the fight again. For this reason, it is advisable to have everyone (this means Hunters and LMs, and Rks , specially Gdwizard of The Forsaken Lonelanders!) come stand on the Igash side of the banners.

The Devoted will run about shouting and poking random people, he does very little damage, just ignore him and let him do his thing. If you kill him, you fail the challenge quest, and you’ve already gotten this far, so just don’t.

The Archers will respawn each time to kill them so you will have two archers throughout the fight no matter, so don’t bother killing the archers, just keep them off the healer and DPS the hell outta Igash.

After Igash dies, the Devoted and the Archers will disappear (sometimes it takes them a few seconds to do so), and then you can loot the chests. There are several chests, and they sometimes drop some rather nice gear for level 56-60 characters in addition to the Moria medallions and the regular IXP runes and relics.

After completing the challenge quest and looting all the chests, each person should walk away from the instance with seven Moria Medallions. Congratz!!