12:21
EDT
There are currently no polls set to the side block
Kuzo: Yeah!!! Kalasin!!!
Kalasin: on the off-chance that anyone missed me- I'll be back soon! Been getting used to placement workload.
Kuzo: Welcome Jillee!!
Kuzo: Welcome Jillee!!
Evelynwulf: Just thought I would say hi. Hi everyone!
Kuzo: Yes, Klasin,..they have fixed it now
Kalasin: Is anyone else experiencing "Game Launch Failure" when they try to load the game?
Gwaethiel: @chiz, @ Kalasin, I hve a kin dedicated to Leeroy....I bow to his greatness...LOL
Chizbo: @Kalasin: its been done; though I'm not mentioning any names here ;)
Kalasin: Does anyone ever just want to pull a Leroy Jenkins during a skirmish?
Kuzo: SIGN UP!!! https://theforsakenlonelanders.shivtr.com/events/949338?event_instance_id=16262447
Fennel: Hope all is well with you Kuzo!
Fennel: off for holiday weekend!
Kuzo: LOL,..I like your idea Fen,,
Kuzo: No,,Just take a great photo!
Fennel: ya know, since we're doing the chicken run on saturday
Fennel: Yes, Chizbo, good question. Any perimeters for the photo contest? I say we have to make it with a chicken in the frame somewhere
Chizbo: What is pic contest this week? Not in-game right now...
Chizbo: Hi Kuzo! What up!
Kuzo: Yo!! Chiz
You do not have permission to shout
Runekeeper Guide by Forvorgor

Welcome to the Runekeeper guide!

Runekeeper is a fun class, and has a strong set of trait lines. RK (commonly abbreviated) can go either damage in red (fire) or yellow (lightning) lines, or healing in blue line. Relatively speaking, RK is easier to learn than some other classes because it has less buffs/debuffs and fewer skills to use, but there are still some challenges. 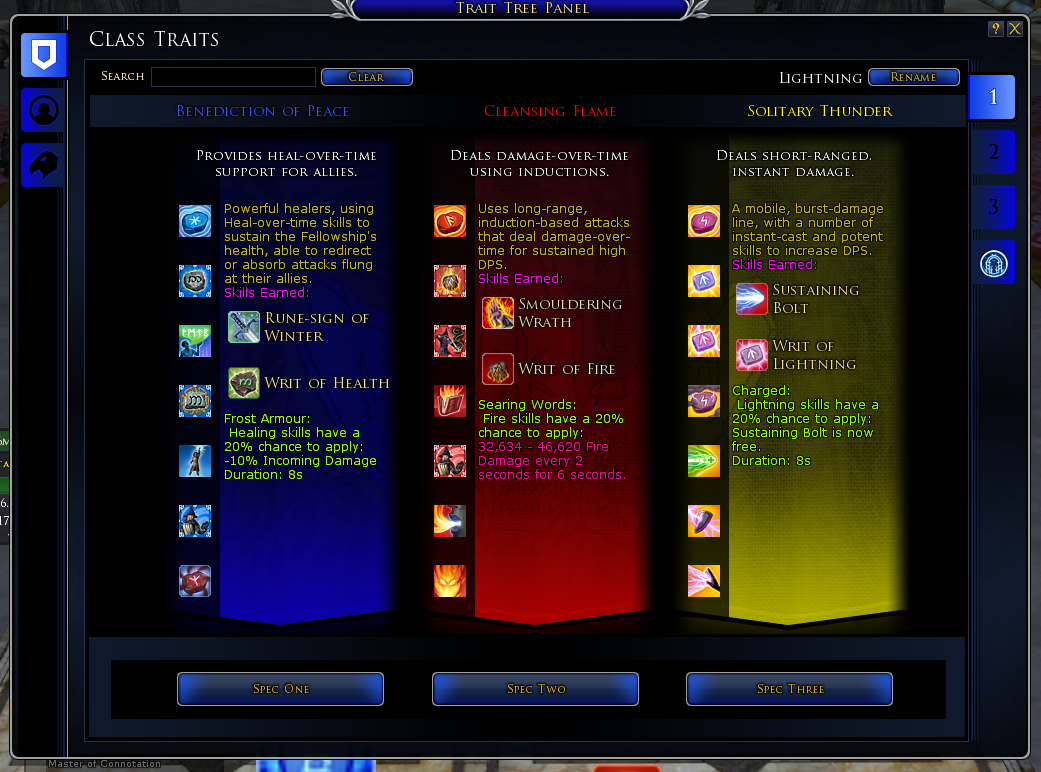 Primary damage line for RK, viable in all levels of content. Damage is mostly from bleeds, and RK also has good AoE.

This is a good defensive trait tree for red that gives you better usability on Self Motivation and some extra mits. I would recommend this build in 3-mans where mobs can deal high damage so you can help out your healer by surviving longer.

This a better trait line in raids and some 6-mans. You can get max damage potential with Epic Conclusion (Yellow) and Closing Remarks (Yellow) at the expense of Self Motivation buffs. If there are a lot of mob inductions, feel free to trait Fulgurite Runestone (Yellow). I recommend getting the first trait in Fortune Smiles (Yellow) and Determination (Blue) for extra stats. As our gear improves, there may come a time when traiting these is no longer necessary.

Used mainly on landscape while questing or running dailies/weeklies. Better mobility than red line and faster burst damage, but less damage output in the long run.

This is the best set-up for landscape, as it gives you plenty of stats and defensive capabilities. The only change you could make is swapping out Statically Charged rank 3 (Yellow) for Flashing Images (Yellow) if you like using your bubble a lot.

Note:
There is a niche trait tree you can make to get an AoE bubble, but in the current set of instances, there is no reason to trait this way. I will add it here if it becomes necessary.

Blue RK is currently very strong because of it's high healing output, DNFs to quickly revive important players, and its debuffs. Used in all instances.